New York’s Primo Bass-Baritone, who will sing Deep River and others in the genre tonight.

ORDER TICKETS NOW
“The Henry Burleigh Story”
at The National Cathedral
February 28th at 7:30 PM
(20% Discount with Code MASPCE)
Featuring:
MAS-sponsored reception with members of the orchestra, chorale, and performers
and
Post-performance Salon featuring MAS’ Mel Hardy with PCE principals and other thought leaders in the field.
Get your tickets here

is a forgotten hero of American music .
Antonin Dvorak’s assistant in New York City from 1892 to 1895, Burleigh was subsequently the composer/singer most responsible for turning spirituals into art songs. His “Deep River” (1915), a sensation in its day, took an obscure upbeat spiritual and turned it into the reverent song made famous by Burleigh,
Marian Anderson, Paul Robeson and countless others.
Before there was Gershwin and Porgy and Bess
there was Harry Burleigh and Deep River.  Listen as MAS Partner, Music Historian, and former Director of the Brooklyn Academy of Music, Joe Horowitz
Music Historian and former Director of the Brooklyn Academy of Music Joe Horowitz provides the quintessential context for this ground-breaking concert performance.  This video was filmed at the renowned Howard University Crampton Auditorium in March, 2017. From the pre-performance warm-up, in which we will develop relationship with the performers more deeply, through the performance, and then through the post-performance Salon discussion and reception at The Cathedral, MAS members and the audience will come to understand the immense impact that Henry Burleigh had on the course of American music through the dawn of the 20th Century and into contemporary music today.  There will also be discussion about his relationship with Antonin Dvorak, the world famous Czech composer and the Black British composer Henry Coolidge Taylor.
Come and learn that for which our nation should appropriately celebrate in the foundations of modern music. 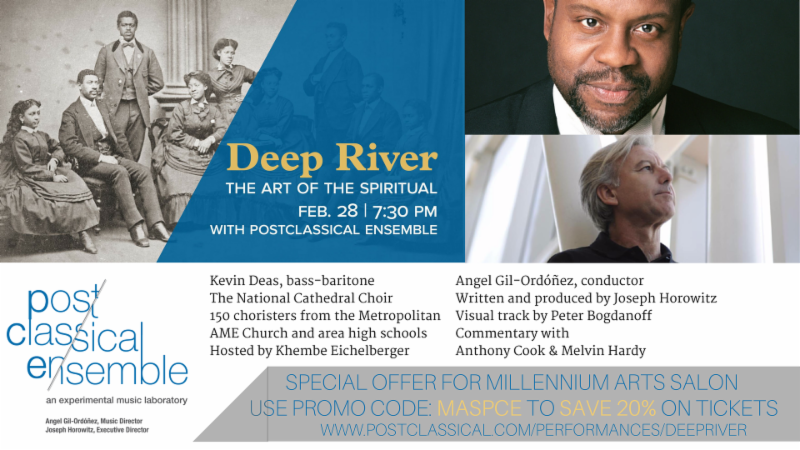 Our friends at PostClassical Ensemble have generously provided to Millennium Arts Salon a discount of 20% off all tickets for this highly anticipated performance.  All MAS Members can get a discount by using the code MASPCEwhen ordering your tickets here.
Your fellow MAS member Mel Hardy will also provide commentary in the post performance.  He will join with PCE principals, along with Anthony Cook, a Georgetown University constitutional law professor with additional legal specialties in social welfare, civil rights and discrimination law. Together, we will provide our sense of relevance of the performances and their content in the context of our current state of affairs, with a lens on our national future.
Join us at the post-performance reception at the National Cathedral, and learn from the chorale, the musicians, and meet Kevin Deas himself!!!  Our membership form is below.  Or contact Mel Hardy at 202-630-4635 and text or leave a message with your email address.  We love sharing such programs with you.
Please join us!
Share: